Last week i attended VMworld Europe in Barcelona. The theme was “Defy Convention”.  Here’s an overview of the VMware focus for the coming year(s): 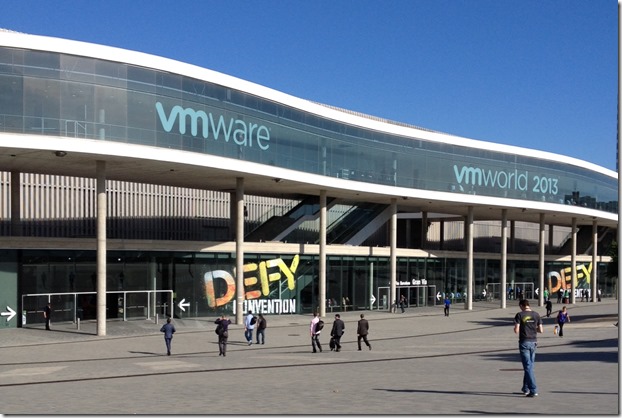 To deliver IT as a Service VMware has for the coming year(s) the following focus areas:

In this blog post I dig deeper in the  Software-Defined Data Center (SDDC). In the next blog posts I will cover the other focus areas.

The SDDC is about virtualization across the entire Data Center. The Software-Defined Data Center consist of the following components:

For the network in the SDDC VMware announced the General Availability (GA) of NSX.  VMware acquired Niciria  and rebranded it to NSX. NSX is all about network virtualization. The NSX network is created in software but look like physical networks.  It’s not only for ESXi but for any hypervisor. NSX works with the existing network infrastructure. Capabilities are:

NSX gives you the flexibility do deploy a multi tier network with software. You are able to save, delete, restore and move it, just like you do for VMs.  Interested customers should contact their VMware representative who can put them in touch directly with a VMware NSX specialist. More information about NSX can be found here link.

VMware has the following announcements made on Software-Defined Storage: 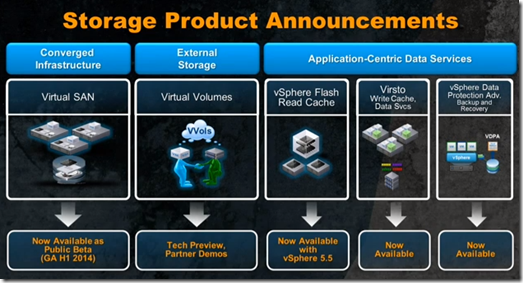 VSAN aggregates all the local storage (spinning disk) in the cluster and creates a shared storage array. With the use of flash disks, read and writes can be accelerated.  When an ESXi host is offline the data is still available on another node. It is fully compatible with High Availability (HA) , DRS, vMotion and SvMotion. VSAN will probably GA in H1 2014 and will supports up to 16 nodes. The minimum of 3 ESXi nodes is needed. It can be scaled-out by adding extra nodes. A use case of VSAN is VMware Horizon View VDI environments.

With VVOL existing SAN/NAS systems become VM-aware.  Operating such as snapshots, replication, caching, encryption and de-duplication  can be done at VM level. VVOL must be supported by the storage hardware. VVOl is available as Technical Preview by storage partners.

vFRC accelerates read IOs of VMs by using local flash storage. It is available in vSphere 5.5. 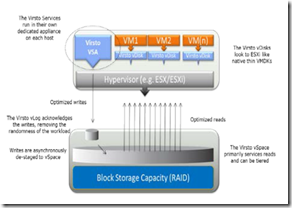 Virsto sits on each host and presents a virtual storage appliance (VSA) to the VMs on the host.  The VMs see Virsto as a new storage mount point, which means Virsto is in the I/O path for the VMs.  Virsto offloads the I/O from the Hypervisor in a more efficient manner.   Virsto will perform a set of actions on the random I/O so it is sequentialized and sent to the block storage layer in orderly, logical blocks. Further it can do high performance snapshots and clones of VMs or VMDKs. Virsto is now available.

VMware vSphere Data Protection 5.5 Advanced (VDPA) is now available. It’s a backup and recovery solution based on EMC Avamar.  Version 5.5 has new features such as backup data replication, integration with EMC Data Domain, automatic backup verification.  The smaller bother VMware vSphere Data Protection (VDP) is included in vSphere Essentials Plus an higher but has a lot of limits such as 2 TB backup store and 100 VMs per appliance.  With VDPA VMware will compete against other virtualization backup and recovery solutions such as  Veeam Backup & Recovery and PHD Virtual.

On the Cloud Management layer the following products are announced: 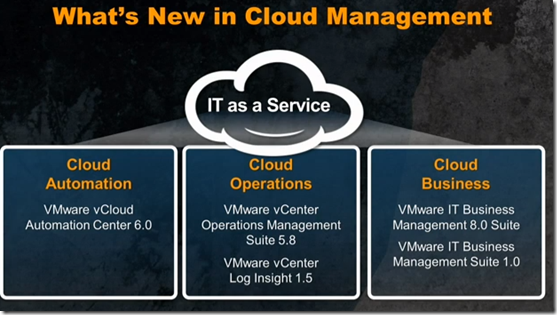 VMware acquired the company “DynamicOps” last year and rebranded it as vCAC. vCAC is all about automating, building, deploying and managing application catalogs.

The new version of the vCenter Operations Management Suite can monitor heterogeneous environments. 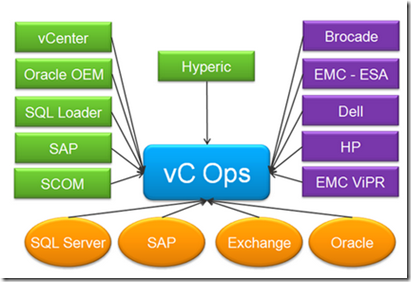 Some examples of new capabilities are:

An overview of the new 5.8 capabilities can be found here. Link These components and products will form the SDDC.