ControlUp is a real-time performance monitor for Microsoft Remote Desktop Services (RDS), Citrix, and physical- and virtual server environments. ControlUp can be used to:

The new 4.0 version of  ControlUp has added support for:

ControlUp is tested against the following lab environment:

The installation is very simple. On a management server execute a single executable (ControlUpConsole.exe).  It’s runs in memory, so there is no installation needed. The console is the GUI for displaying data and running tasks. As prerequisites .Net Framework 3.5 SP1, Active Directory connection and a internet connection  is required. ControlUp will default enabled in Enterprise Mode. The Enterprise Mode offers features that allow you to collaborate with team members and defining user roles and delegate administrative  tasks to different ControlUp users. The other option is to use Standalone Mode. Standalone Mode does not require an active  internet connection but is limited, for example in collaboration and delegation.

For VMware environments you need to add the vCenter Server to the ControlUp Console.  When the vCenter is added, the cluster(s), hosts and VM’s inventory is displayed in the ControlUp console. In the following example we added a vCenter server with a 1 cluster  that contains 3 ESXi hosts.

To organize the computers a folder tree is created. For ESXi hosts, counters on CPU, Memory, Networking and storage can be monitored. For every counter a specific tresholds per folder can be configured. Here is an overview of counters that can be monitored on the vSphere layer: 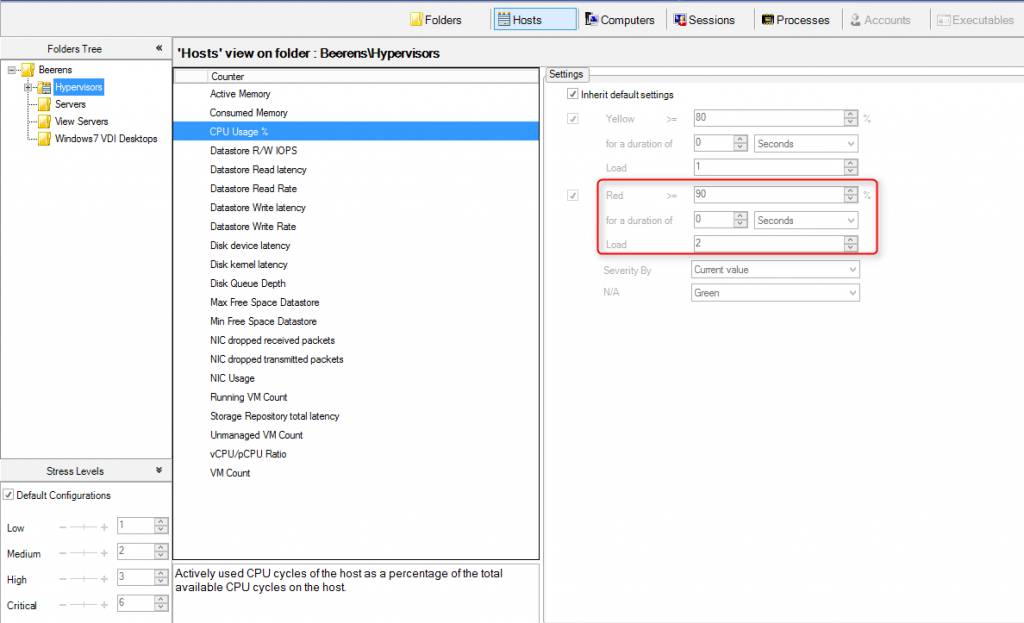 The Stress level reflects the state of the performance metric reported to the console. In the following example we stressed  the ESXi hosts memory threshold (90% >)  by powering extra VMs.

The stress level jumped to high (red) within seconds.  So in real time you see what is happening to the vSphere layer. In the next example we stressed the datastore latency (> 22 ms)  and free datastore space (below 500 MB).

In the above examples we see when a threshold is exceeded on the VMware ESXi hosts, it is displayed almost in real time in the ControlUp Console. 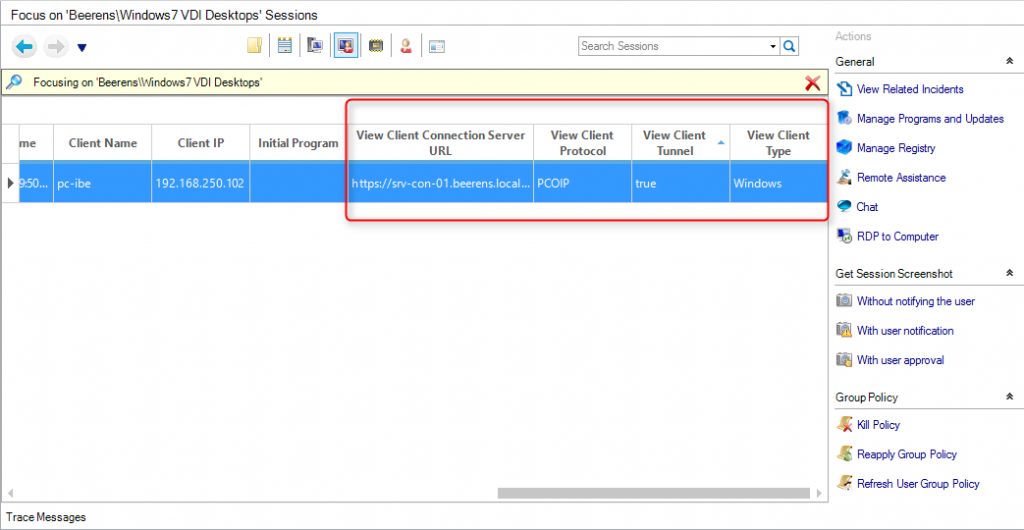 In the following example we have 4 Windows 7 VDI desktops. As you can see the stress level is low or medium.

In a Windows 7 VDI desktop we installed to 3e party tool “heavyload” to generate CPU load on the VDI desktop. When starting “Heavyload” the CPU spiked to 100%.

In the ControlUp console we looking in the Computer tab and see the Stress level after a couple of seconds changing to “High” and the CPU graph is raising to 100%. 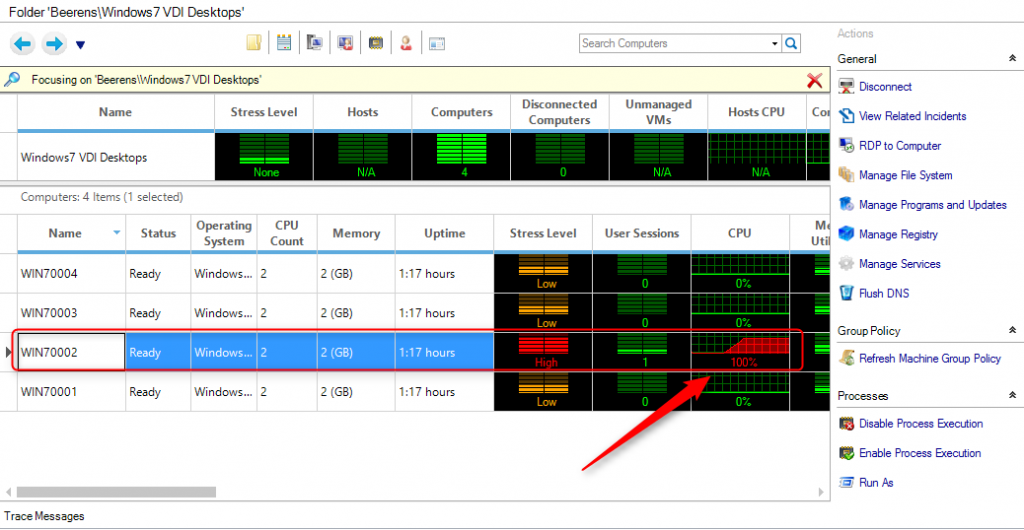 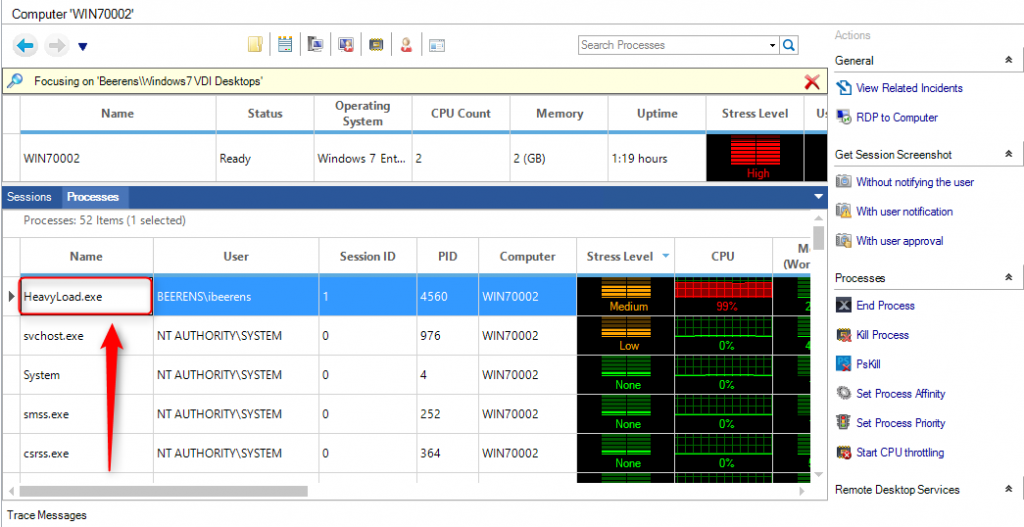 On the right menu you see some actions that be performed. Here are some examples:

In the following example we use the tool “heavyload” again to generate memory load.  Now we see that the Stress Level is critical again and that the Memory is red.

When a service stops or a event occur it is possible to generate an alert. Using the “Incident Triggers” feature you can configure triggers to detect the following conditions:

When a trigger occur an real time alert can be generated such as sending an email. There are pre-configured incident triggers for Horizon View services and events that occur.

ControlUp has a launched an Expert Program for vExperts and recognized VMware View Consultants. To apply for the license, register here. All other VMware View admins can simply download ControlUp from the ControlUp website and enjoy the free unlimited 30 days trial.

Version 4 is the first version that supports VMware vSphere and Horizon View. In this blogpost I highlighted a couple of examples that shows the strength of ControlUp and how easy it is to install and use. In real time you see what is happing in your environment and drill from the hypervisor down to the Windows process level to identify what is causing the problem. This makes troubleshooting a lot easier on VMware Horizon View environments. The VMware Horizon View specific counters are a bit limited on the moment but ControlUp is asking your feedback on this. If you miss something let them know by using the “feature request” button.

ControlUp has a lot more features then showed in this blog post. Other features are for example:

All these features makes ControlUp a powerful tool for the VMware Horizon View Administrator.