In version 10 of Nakivo Backup and Replication the following new improvements are added: 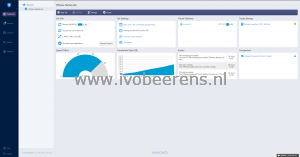