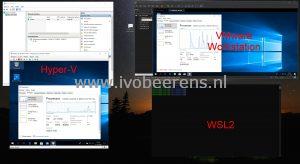 This is very cool, now you can run VMware Workstation and Hyper-V role at the same time even with the WSL active.