Last week I tried to patch a vCenter Server High Availability (VCHA) 7 cluster environment. I read the documentation and the procedure described looks still the same as in version 6.x. First patch the witness node, then the passive node, failover the active node, and patch the passive node using the software-packages tool. The whole process is described in this link.

When I tried to stage the ISO on the witness node the following error occurred: 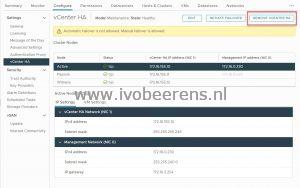 After the patching of the single VCSA, I redeployed the VCHA cluster again.

Conclusion: The vCenter Server HA cluster documentation still has the VCHA 6 update procedure documented that does not work anymore. I will update this blog article if there is more information available.