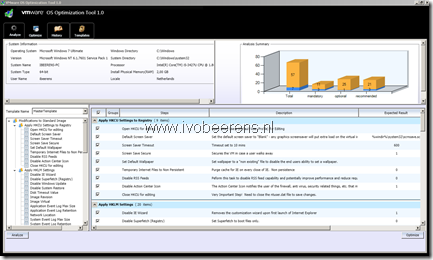 VMware OS Optimization Tool can analyze a local or remote Windows 7 template and apply the VMware best practices to optimize the template on the following components:

With this tool optimizing  a Windows 7 templates is very easy. More information can be found on the VMware Labs Fling webiste found here.

Windows could not finish configuring the system. To attempt to resume configuration, restart the computer.

Every time when restarting the VM, the message appears. After some troubleshooting such as disable services and active software before the Sysprep I found Microsoft Knowledgebase article  “A Windows 7 or a Windows Server 2008 R2 image deployment process stops when you try to deploy the image on another computer” KB981542. It stated that the Sysprep problem occurs if the original operating system contains a registry key that is larger than 8 kilobytes (KB). After installing the hotfix I was able the Sysprep the Microsoft Windows 2008 R2 VM. The Sysprep problem occurs on Windows7 and Microsoft Windows 2008 R2.